Just a quick update to let everyone know that on Thursday, March 12, 2015, Amazon will be promoting Broken Realms as a Kindle Daily Deal. The price will be going down to 99 cents for one day only. Please pass it along and I’ll post a reminder Thursday morning. And on Friday, I’ll post an update on how the promotion went. Cross your fingers!

Also, if I get the final files in time, I will be posting the cover for Broken Dragon (The Chronicles of Mara Lantern, Book 3), which is coming along nicely after some prolonged hair pulling. If all goes well with editing, I’m thinking it will come out at the end of April.

I’ll check in later in the week.

Broken Souls (the Chronicles of Mara Lantern, Book 2) is now available in paperback at Amazon. The price fluctuates so I won’t post it here, but here’s a link directly to the book’s page.

All the editing and artwork came together late last night and I was able to get Broken Souls uploaded to Amazon and now it’s available a few days early. The paperback version has been proofed and should be available within three or four days.

Now back to writing the next book. . .

Broken Souls (The Chronicles of Mara Lantern, Book 2) will be released next week! (Kindle format, paperback to follow in a week or so.) Here is the cover: 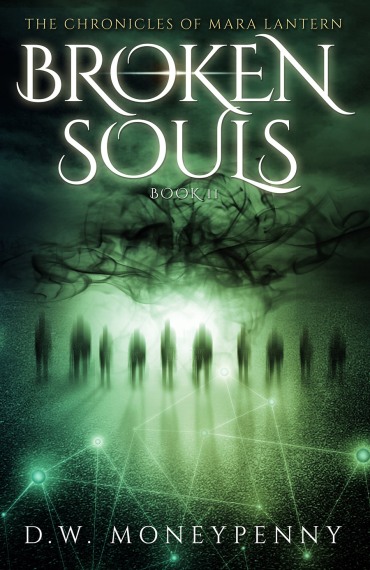 Be sure to sign up for the new release email list and you’ll be the first to know when it goes live.

Here’s the description of the book:

In the alternate reality from which Juaquin Prado hails, when a person dies, his spirit is interred, not his body. So when Prado gets killed during a botched bank robbery, his soul, left unattended, goes viral, possessing dozens of people simultaneously, evicting them from their bodies and causing them to decompose even though they are still alive.

As if Mara Lantern doesn’t have enough to worry about. Now, in addition to mastering her new metaphysical powers and having a mentor with a propensity for turning into a dragon, she must deal with mindless rotting people roaming the streets of Portland, Oregon.

This is an illustration of the Chronicle of Creation as described in Broken Realms. I actually stopped writing to draw this file and forgot about it until I found it this evening, so I thought I would share. In case you don’t remember, the Chronicle of Creation is the copper medallion that turns into a ball of blue light and displays the lines and nodes representing the different realms of existence.

The design of the medallion itself represents what Ping describes as the “Levels of Sentience.” Here’s a refresher on all of the concepts symbolized on the face of the Chronicle. (It will be a nice refresher for those of you looking forward to purchasing Broken Souls when it comes out at the end of the month.) Anyway, here goes:

The Chronicle of Creation is made up of three concentric circles that represent the three levels of sentience, or awareness that an individual can have of the nature of existence. The inner circle (with the orange crystal) represents THOUGHT. The next outer ring (with the parallel line symbols), represents PERCEPTION. The outer most circle represents REALITY.

The crystals and symbols in each circle represent the ELEMENTS of each level. The center orange crystal represents FREE WILL, which a prompter like Sam can manipulate. In the second circle, you see the parallel line symbols. Starting at the top, going clockwise, they represent the elements of PERCEPTION: EARTH, WIND, FIRE and WATER. These elements can be manipulated by pretenders. In the outer circle, you find the larger blue azurite crystals and the circular symbols. Again, starting at the top and going clockwise, those symbols represent the elements of REALITY: CONSCIOUSNESS, TIME, CONSEQUENCE AND SPACE. These elements can be manipulated by progenitors, like Mara.

Well, that was a little geeky, wasn’t it? Anyway, keep your eyes open in the next week or so, I will be posting the cover for Broken Souls (The Chronicles of Mara Lantern, Book 2). And the ebook should be out by the end of the month. (Paperback will take a little longer.)

Rewrites have been completed on Broken Souls (The Chronicles of Mara Lantern, Book 2) and it has been shipped off to the editor. I’ve also ordered the cover design, which I will share when it is complete. If all goes well, it will be out the last week of September (in ebook format, print will take a little longer.)

Also, I’ve got the preliminary outline of Book 3 done and I will begin writing tomorrow. You can follow my progress on the little bar chart to the right of this page. I’m shooting for Book 3 to be out in December, assuming holidays don’t get in the way.

Drop me a line if you have any questions.

Just finished up the final scene of Broken Souls this morning. The last few chapters of the book took much longer than I anticipated just trying to get all of the twists to turn the way they are supposed to. Winding up a story while simultaneously laying the groundwork for the next one is a challenge.

Rewrites should take the rest of the month, then off to the editor. If everything goes smoothly, it might still come out the last week of September. I’ll begin outlining Book 3, Broken Dragon,  while I’m doing rewrites. I’m hoping to have about a third of the first draft of Book 3 done before the edits on Book 2 come back. I’d love Broken Dragon to come out before the end of the year, if possible.

I’ll post the cover design for Broken Souls a week or two before the book is released.

If you’ve been following the little bar chart on the right side of this page, you know that I’m 80% through the first draft of Book 2 of The Chronicles of Mara Lantern entitled Broken Souls. I expect to be done by the end of next week. Then it’s on to rewrites and the editing and formatting process. I’m still hopeful that the book will be out before the end of September, but a lot depends on if it gets through the editing process without any major hitches.

I will begin writing Book 3, Broken Dragon, while Book 2 is being edited, so my hope is it will come out shortly before or after the holidays, again, depending on the editing process. I’m fairly certain I can have the first draft of that book done in time.

On a separate note, the launch of Amazon’s new Kindle Unlimited program kind of threw a hitch into all of my evaluations of whether or not to remain exclusive to Amazon going forward. Unlimited allows readers to pay a monthly subscription fee of $9.99 to “borrow” ebooks instead of buying them outright, but Amazon compensates authors who participate.

Not to get too deep into the weeds, Broken Realms has gotten a healthy number of borrows and I’d like to see if this continues and what impact it has on sales. So, for at least the next three months, the book will remain exclusive to Amazon.

How that goes will determine whether it stays exclusive and whether or not the rest of the series participates in the Amazon programs. If you have any thoughts, feel free to let me know.

I did an interview with Connie Brentford over at themoonlightersguide.com about writing in general and about the Mara Lantern series. Check it out.

Going into this whole fiction thing, I made a few assumptions, not consciously, but you know, I just thought things were a certain way, and it turns out they are not. For example, when I made the decision to make the protagonist in the Mara Lantern series a young woman, I assumed that male readers would probably not be interested. My original thought was Mara would be a guy, but technically adroit women are much more interesting than their male counterparts, and I’m not just talking about the fictional ones.

Turns out I’ve got some male readers, and not just a few. I’ve not done a survey, but there are more than I assumed there would be.

Another assumption I made was the vast majority of ebook readers were Kindle readers, like me. There’s no denying that Amazon is the big kahuna in the market, but I’m starting to think that their percentage in the market isn’t as much as it used to be. You see, I just finished up with a member giveaway at LibraryThing in which I am giving away 100 review copies of Broken Realms in ebook format. I offered a choice of EPUB or Kindle format. About half of the winners have gotten back to me and it is running 50-50, which surprises me. Now, that might just be the make up of the membership of LibraryThing, but I doubt it.

Anyway, for me it was a bit of an epiphany. It also indicates that my participation in Amazon’s exclusive program (KDP Select) is probably not the best long-term strategy. That being said, I do get the feeling that for my first three months in the marketplace, it has helped me get the book and the series established, at least to some degree. I definitely got a significant bump in sales during the Countdown Deal I ran last month, and, after the deal ended, sales leveled off at a slightly (very slightly) higher level.

My three-month enrollment in KDP Select runs out at the end of July. Most likely, I will not renew and begin distributing my books to the other online book retailers. Just to make sure, I’m running a pricing experiment for the next two weeks to see if I can replicate the results of the Countdown Deal without having the benefit of appearing on Amazon’s Countdown Deal pages. The price of Broken Realms has been lowered back down to 99 cents temporarily and I’ve done a bit of marketing, so if I get a sales bump comparable to what happened last month, then there’s no real benefit to staying exclusive to Amazon.

I’ll know in a couple of weeks, but I’m pretty sure The Chronicles of Mara Lantern will be showing up at B&N, iBooks, Kobo and a few other places real soon.

How’s Book 2 coming? Little slower than I anticipated at this point, but I’m determined to make a September publication date.